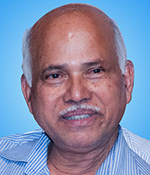 Prof. Dr. Richard Pinto joined Tata Institute of Fundamental Research (TIFR) in 1964 and obtained Ph.D on high field effects in disordered semiconductors in 1972. After post-doctoral work at Allen Clark Research Centre, UK he established silicon device research facility at TIFR and pioneered the development of charge coupled imaging devices at TIFR. After the advent of high Tc superconductors in 1987, he proposed a program on growth and study of high quality thin films of high Tc superconductors by pulsed laser deposition (PLD), and built a state-of-the-art high Tc thin film laboratory at TIFR. He also pioneered microwave transmission studies in high Tc thin films in the country in the early 1990's, and led a team which realized the highest critical current density and lowest microwave surface resistance in Ag-added (Ag-doped) superconducting YBCO thin films. His group at TIFR has also made significant contributions in the area of ferroelectric and colossal magneto-resistive-manganite thin films. He was the Chairperson for two major International Symposia, one on Superconductivity in 1996 (ASMCCD'96) organized as a part of Golden Jubilee Celebrations of TIFR, and the other on Magnetism and Superconductivity in 2001 (ASMM2D 2001) organized by TIFR jointly with Mangalore University. He was Professor and Chairman of Department of Condensed Matter Physics and Material Science till October 31, 2002 when he superannuated from TIFR.

Prof. Pinto joined Electrical Engineering Department, IIT Bombay, in 2002 and was the key member of the team which created the IITB Nano-fabrication facilities during the period 2005-09. He was also responsible for setting up the c-Si photovoltaic lab as a part of National Centre for Photovoltaic Research and Education (NCPRE) at EE department of IIT Bomaby. He served as Distinguished Professor at IITB till 2012.

Prof. Pinto has Co-authored over 200 research publications in refereed journals and guided many Ph.D and M.Tech students. He has served in many national committees for the development of magneto-optic storage devices, IR Focal Plane Arrays and Charge Coupled Device linear arrays for satellite imaging. Recently, he has also served as consultant for setting up of Nano-scale Research Facilities at National Physical Laboratory and at IIT Delhi.